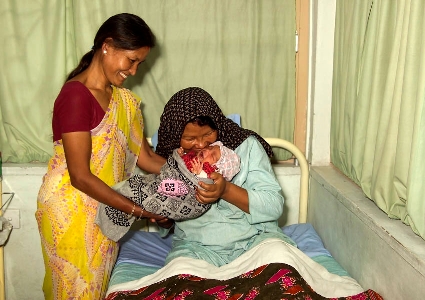 PARTNER
Public Health Concern Trust-Nepal (phect-Nepal), a cooperative of physicians and paramedics founded in 1991 to provide a sustainable model of community-based health services.

THE SITUATION
Nepal is one of the poorest countries in the world and is positioned at the 145th place out of 188 countries and territories (Human Development Index 2015). The gross national income per capita is less than 700 euros per year; 41.4% of the population lives in “multidimensional” poverty and 18.1% is almost in the same condition (UNDP, HDR 2015). The civil war between the feudal monarchy and the Maoist movement led to the destruction of health facilities with consequent negative effects on the health system. Women living in remote rural areas and marginalized urban areas have limited access to reproductive health and family planning services and have no contact with health workers during pregnancy. The lack of affordable and accessible reproductive health care is coupled with a general lack of knowledge about reproductive health issues and women’s low social status, which often leads to the non­use of those health services, which do exist. The maternal mortality rate is 258 deaths per 100,000 live births, one of the highest in the world. Gender-based violence is the leading cause of death among women aged 19-44 and 77% of incidents occur within the family.  Women are discriminated by socio-cultural practices, especially in rural society:  an unmarried woman has no social status and can have an identity document only after the age of 16, at the request of her husband.

GOALS
The Center, established in 1999 to address women’s reproductive health needs through a holistic approach, provides:  sexual and reproductive health (SRH)  services  for women, men and adolescents,  home visits, medical and gynecological services and counselling,  information, education and advice on family planning, prevention of sexually transmitted diseases, pregnancy and post-natal care, menopause, breast and uterus cancer prevention services; psychological, social and legal assistance as well as support in case of domestic violence; outreach service with a regular mobile clinic service covering 6 villages of Kirtipur Municipality; Gender Based Violence (GBV) program that aims to improve reproductive health status of people as well as advocate against gender-based violence etc. Particular attention is also given to the involvement of men in the program; workshops are organized with a special focus on adolescents. The Centre houses an obstetrics / gynecology department (10 beds) with a blood bank for emergencies and complex surgical interventions.

BENEFICIAIRES
Women, men and young people of Kirtipur Municipality, the Centre’s staff and the community of Kirtipur in general.

EXPECTED RESULTS
Each year the Center offers services and counseling to more than 12,000 women and young people. It involves 21 employees with different roles and 70 volunteers belonging to the community.

DURATION OF THE PROJECT
1999-ongoing

COST OF THE PROJECT
The management cost is 70,000 euros per year

WHO IS FINANCING THE PROJECT
From 1999 to 2002, the Center was funded by the Joint EC / UNFPA Initiative for Reproductive Health in Asia (US$ 336,200); AIDOS and phect-NEPAL US$ 93,773 (in kind contribution). Since January 2003, the Centre has become partly self-sustainable and partly has been financed by AIDOS with private funds.