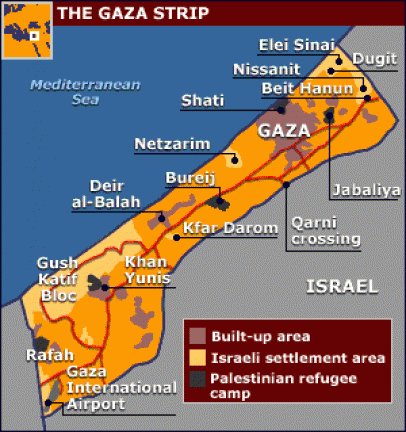 WHERE
The Centers are located in El-Bureij (south of the city of Gaza) and Jabalia (north of the same city) refugee camps.

THE SITUATION
Palestinian refugees living in the Gaza Strip face dramatic problems due to overcrowding, lack of water and of sewage and waste collection systems which severely affect health conditions. In addition, the long military occupation had dramatically impoverished the population. Women are particularly affected by the scarce endowment of reproductive health (RH) services and the fear among Palestinians of disappearing as a nation has contributed to a dramatic increase in the number of pregnancies, few of them medically attended. Women are at risk, especially during pregnancy and post-delivery, of increased maternal mortality/morbidity due to a range of physical and psychological problems (anaemia, complicated labour and delivery, post-partum haemorrhage and depression). In addition to the other adverse outcomes of pregnancy is the lack of appropriate RH care that can address domestic and gender-based violence (GBV).
According to a demographic survey of 1997, in the Gaza Strip total fertility rate was estimated at 6.9 births per woman. In 2007 the rate decreased to 5.06 (UNFPA, State of the World Population, 2007). Since the beginning of 2006, the population of the Gaza Strip has been experiencing a dramatic downturn in the humanitarian situation determined by a number of key political, security and economic developments including: a) the intensification of Israeli security and other access measures in the Occupied Palestinian Territory; b) the rise of the poverty level to 79% of the population; c) the worsening in levels of violence experienced by Palestinians, especially children and women; d) the collapse of  health and sanitation services due to the freeze on aid and tax revenues. With little other access to comprehensive counselling and support services, women and children are the most vulnerable groups of society. Enhanced mobility restrictions further isolate families from their support networks, limit their access to services and undermine the coping mechanisms. The worsening of the political and economic situation and the increase of the social tensions have produced significantly higher levels of public and private violence.

GOALS
In order to respond to the dramatic situation of Palestinians, especially women, in the Gaza Strip, in partnership with local organizations, AIDOS established, respectively in 1995 and 1998, two Women’s Health Counselling Centers (HCC) in El – Bureij and Jabalia refugee camps: El-Bureij has one of the highest birth rates in the world; Jabalia has an unemployment rate between 50 and 60 percent. The Centers provide: Women’s health care and prevention services including primary care of gynecological problems, detection of breast and cervical cancer, ante and post-natal care,  information and counselling regarding all contraceptive methods, pre-delivery  and post-delivery courses  with baby care and exercise classes;  Psychological counselling for individuals and couples, suffering from psychological disorders, and for victims of domestic violence or sexual abuse;  Social counselling for problems of economic nature; Legal counselling on legal issues, including Islamic law, marital law (divorce, custody, alimony, marital rights) and domestic violence; Socio-psychological counselling for men and male adolescents;  GBV program. Specific workshops on GBV are addressed to adolescents as a way to prevent its future occurrence. Leaflets about sexual harassments and physical abuse are distributed in the community. Particular GBV cases are referred to the Gaza Community Mental Health Program and the Palestinian Center for Human Rights for psychological and legal intervention; Community-based workshops on specific topics, regarding several aspects of reproductive health, throughout the camps; Referral system with governmental and non-governmental organizations working in the health, legal, social and psychological fields.

BENEFICIAIRES
Every year the Jabalia and El-Bureij HCC provide their services to women, men, adolescents and children, respectively to 16.000 and 20.000 people.

AIDOS ACTIVITIES
AIDOS is the executing agency responsible for providing technical and professional assistance to the project staff to improve its capacity to deal with consequences of violence, including training in reproductive rights, counselling skills and women’s self-empowerment skills for the outreach program.

EXPECTED RESULTS
Each month, the HCC receive an average of 1,000 women who access clinical services, while an average of 225 women use legal, psychological and social counselling services. The Clinic offers a ultrasound service receiving an average of 290 patients per month. An average of 260 women per month participate in physical education and gymnastics activities before and after childbirth. Workshops are organized every month on specific issues identified by the Center, by women and by the community in which about 920 people participate. The activities of the Centers include a program of home visits carried out by the operators which is around an average of 360 visits per month. The Centers continued to operate even in emergency situations by activating new services: group therapies for women victims of domestic violence, for adolescents and children with trauma and psychological problems deriving from the Intifada; information and educational activities on new issues related to the deterioration of the living conditions of the population such as training for the domestic production of food for the reduction of family expenses and training for the start-up of income-generating activities.

WHO IS FINANCING THE PROJECT
The Centers have been financed over the years by the Italian Government, the Japanese Government and the Belgian Government through UNFPA, the Waldensian Table, the Open Society Institute, the Monte dei Paschi di Siena Foundation and AIDOS with private funds. For 2008-2011 the project received a co-financing from the European Commission of € 1,389,159.